Wow, this is the first time that I have had two quilts ready to enter into the Spring 2015 Blogger's Quilt Festival.  My second entry is my Happy Go Lucky hexagon quilt. 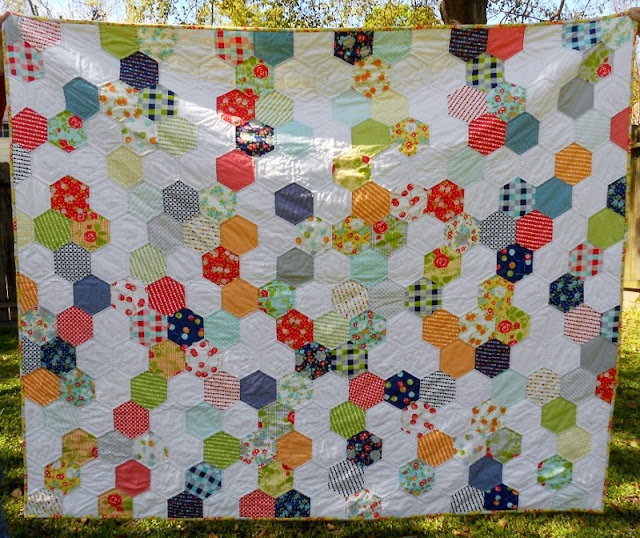 This quilt began as a car project during a long car ride in Christmas 2013 and was just finished.  It really did help me not be such a horrible back seat driver.  If there is ever another long car ride in my future, I will definitely have a hexy project.  Because it was pieced in a car, the hexy placement is totally random. 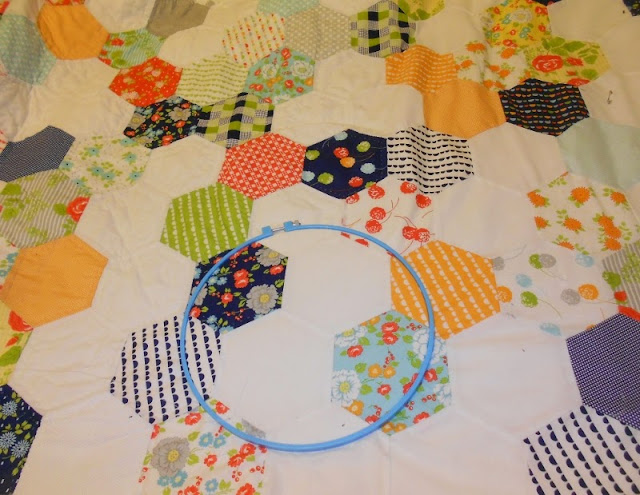 Since it was all hand pieced, I decided that the quilting should done by hand as well.  Each hexy is echo quilted and the white hexy's have an extra echo.

I am glad that I am entering this into the Spring Blogger's Quilt Festival since it reminds me of a spring picnic.

Please check out the other entries as there are loads of quilty inspiration,  There are also some great prizes for sharing (Hello Babylock, how I would love to take thee home!).

It is time for the Spring 2015 Blogger's Quilt Festival and I have decided to share my "Burning Love" quilt.  It is 58" x 56" and was quilted using straight line quilting.

This quilt was made as part of the test quilts for the Improv Handbook for Modern Quilters and was chosen to be included in the book. 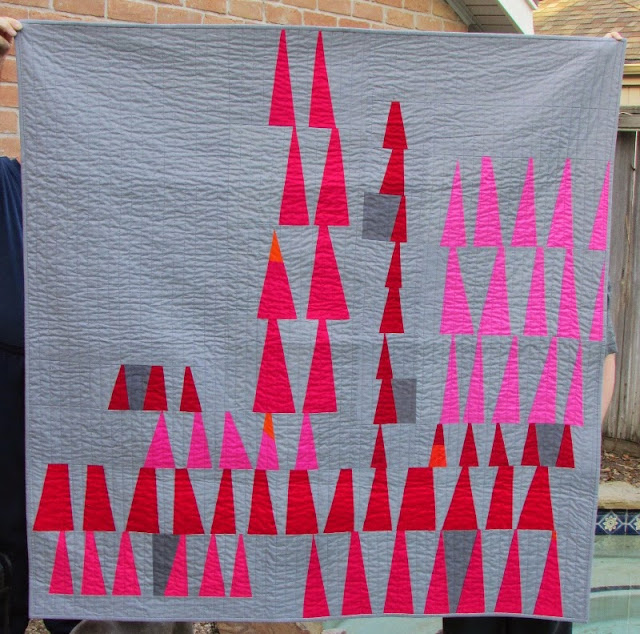 When Sherri asked for test quilters, I immediately knew that I wanted to sign up.  I had been following her blog, daintytime, for a while and was waiting for Sherri's book on improv quilting.  I really like the look of improv quilts, but never achieved the results I wanted.

Once I received the email assigning me to a test group, I thought I would start by restricting myself to using a defined color palette.  Since I mostly had red and gray solids in my stash, that became my color choice.  I don't think the photo shows this, but the main background gray has very slight variations.  The fabric must have come from different dye lots and I like the effect it has on the quilt. 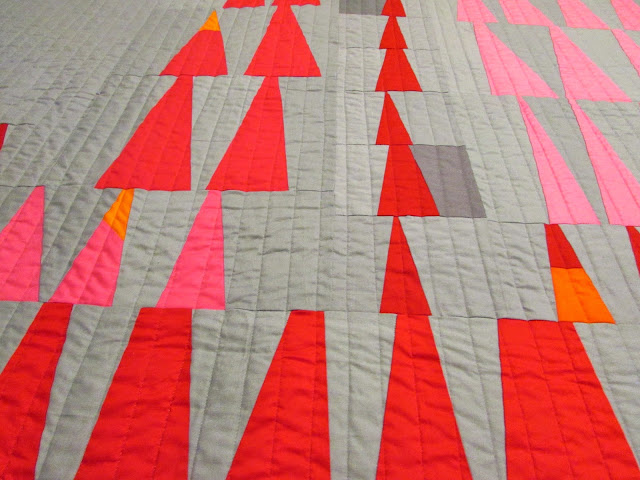 I'll admit to being stuck at first.  I think that the hardest part for me was getting started and making the first cut.  I then remembered a saying that I heard that "improv always means saying yes, and ...."

So I took a strip of red fabric, made an angled cut, and said "yes".  And, then I made the next cut and the quilt construction started to take off.  I wanted to take process photos, but once I got started I just got into the flow of making "blocks".

The quilt top took about three nights to complete and the layout is the first one that I laid out on my design floor.  I did try out some other layouts and stepped back from it for a day to really think about it, but I came back to the original layout. 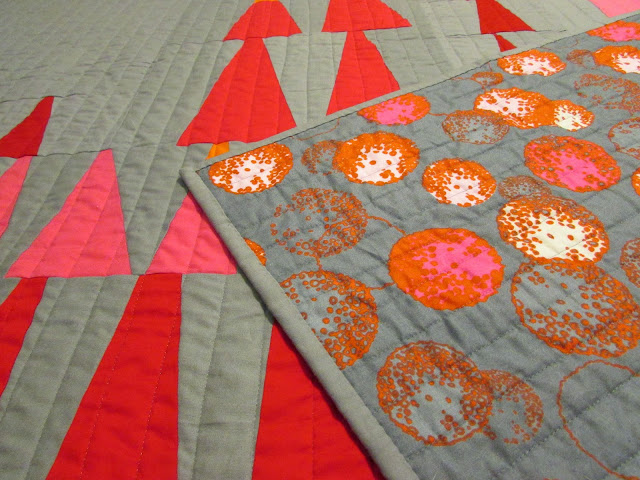 I learned while working on this quilt to not limit myself.  When I first read the directions regarding working with a Flying Geese block, I had a moment of panic and immediately thought "I can't do this, I don't do triangles".  But that was nonsense of course, I just had to throw that thought into the garbage and get to work.

Also, this is the first time that I have ever made a hanging sleeve or used invisible thread.  I was a bit worried about using invisible thread, but there were no problems at all during the quilting.

I'm not in the habit of naming my quilts.  I knew that I had to choose a name, but couldn't really think of anything.  It was the anniversary of my aunt's death from cancer and I was playing Elvis music all day because she was such a super huge fan.  When I heard the song "Burning Love", the name stuck with me. 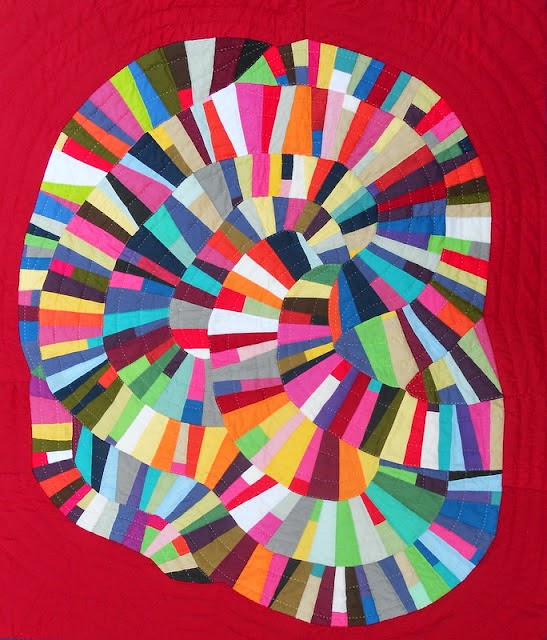 "Burning Love" is the second quilt that I have made using one of Sherri's techniques.  "Busting Out" was my entry into the 2012 Spring Blogger's Quilt Festival.   It was made as part of the Mod Mood Quilt Along which is the "Get Your Curve On" score in the book.  Even today, I cannot believe that I made this quilt.  Maybe because it was so different from anything else I had ever created or maybe because I was totally lost in the flow during the construction.

I am looking forward to working through all of the scores in the book.  Yes, I can't believe that I want to try every technique in a book.  Maybe I will have another improv quilt to share during the Fall Blogger's Quilt Festival.

I hope that you will check out all of the entries into the Blogger's Quilt Festival.  There is so much quilty inspiration and I enjoy visiting the blogs and reading about the quilts.  A big thanks to Amy for sponsoring this event.

Linking to Finish it Friday and Whoop, Whoop Friday.
Posted by Mina at 7:16 AM 4 comments:

I am happy that I have been getting older WIP's finished in 2015.  So for May, I think my goal for A Lovely Year of Finishes will be to get these scrappy pink cross blocks completed, just because I am getting tired of seeing them on the design wall. 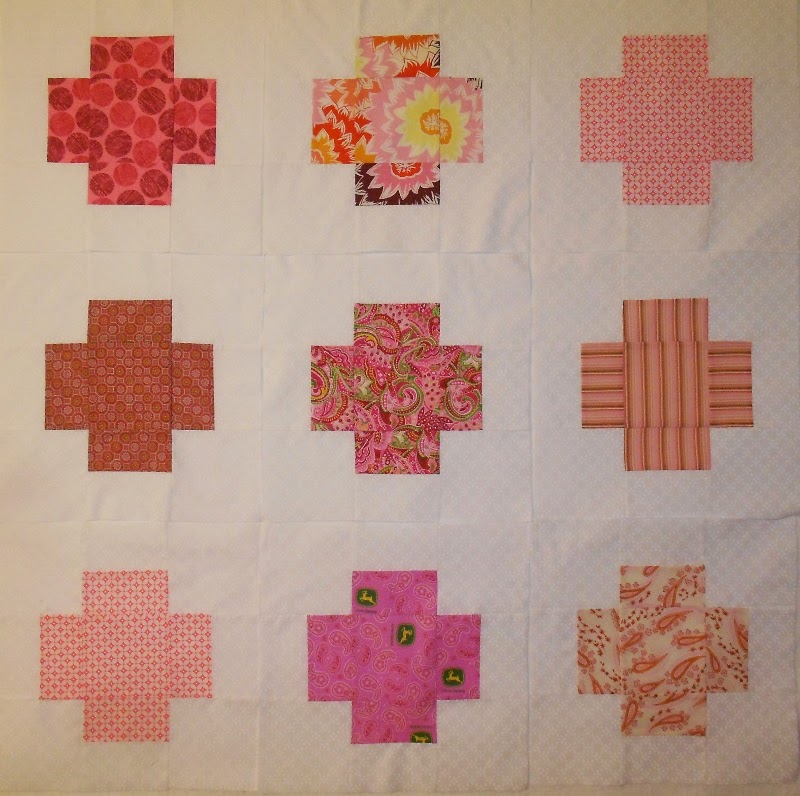 This will probably be the last quilt that I get done for the Hands 2 Help Challenge, but you never know.  I may just find more sewing time and keep going (well I can dream big cant I).

Linking today to WIP Wednesday.
Posted by Mina at 7:30 AM 4 comments:

Finish It Friday - Sew Together Bags

So I had to do it.  I have been seeing all these great sew together bags and I knew that I had to jump in and try it.  And guess what - I have made 2 bags and thought they both turned out great.

Bag #1 was made for my sister's birthday.  It took me seven hours to make and I sewed through the night.  Lesson learned - don't wait until the last minute for craft projects. 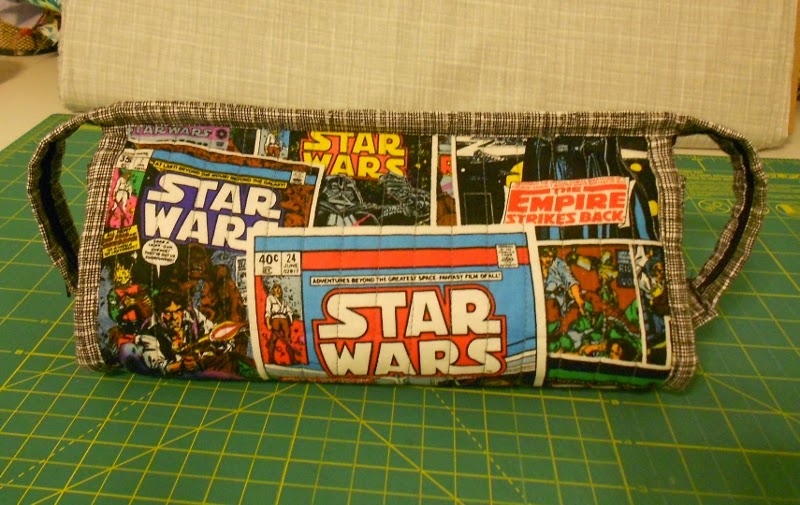 I guess you can tell she is a Star Wars fan. 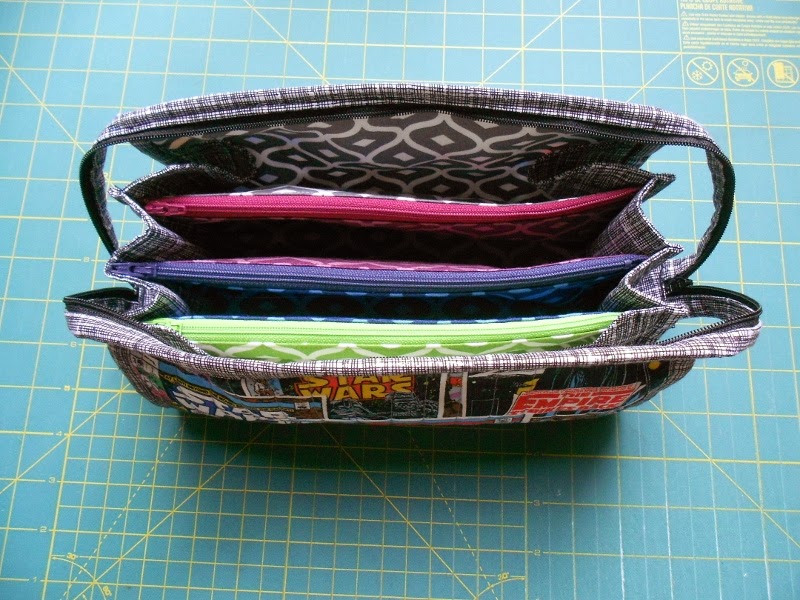 Bag #2 was made for my mom's birthday.  Her requirements were - something pink & yellow, bold, and add in some green.  It took a while for me to choose fabrics, but I ended up using some Amy Butler from stash. 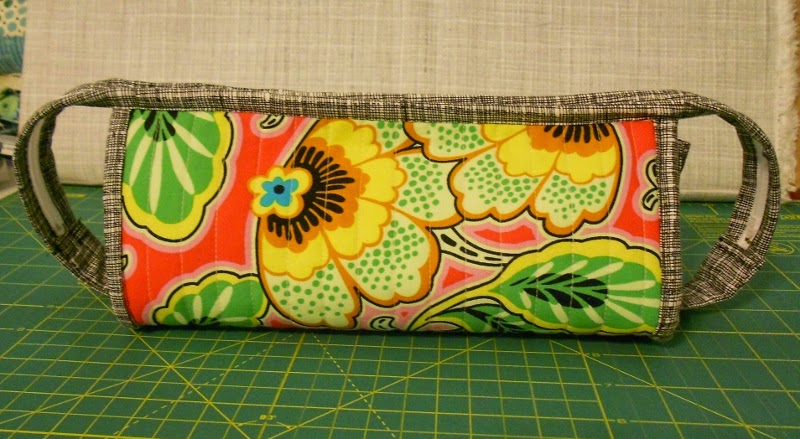 The hardest part of making these bags is definitely choosing all the fabrics and zipper colors. 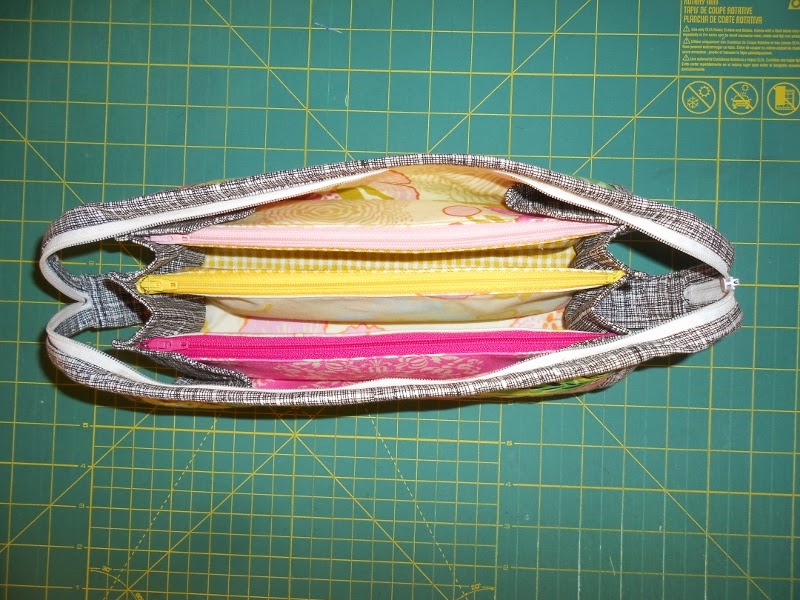 Now the next bag will be for me and I know I will have a hard time making the fabric decisions.

Linking today to Finish it Friday and to Whoop, Whoop Friday.
Posted by Mina at 8:22 PM 2 comments:

Mina
Houston, TX
I am just a gal that works full time and kinda quilts with the help of my quilt dogs.